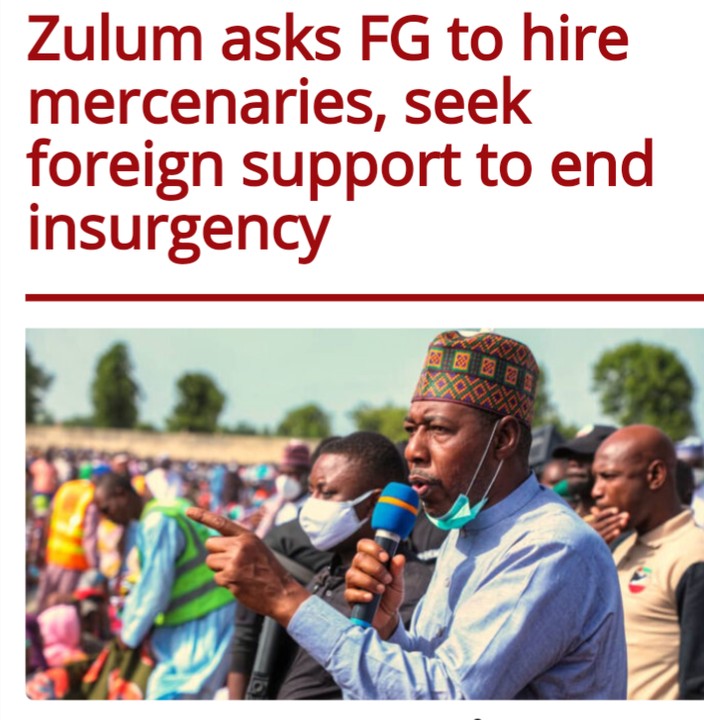 Zulum Asks FG To Hire Mercenaries, Seek Foreign Support To End Insurgency by Racoon
(m ): 5:05a
Babagana Zulum, governor of Borno, has asked the federal government to hire mercenaries and seek support of neighbouring countries in the fight against insurgency.The governor spoke at the North-east Governors Forum meeting which held in Bauchi on Wednesday.
The meeting was attended by Bala Mohammed, Ahmadu Fintiri, Muhammad Yahaya and Darius Ishaku; governors of Bauchi, Adamawa, Gombe and Taraba states respectively.Zulum, who chairs the forum, said joint action is required to end the insurgency.
“Again, I want to use this opportunity to call on the federal government to seek support from our neighbours, especially the Republic of Chad and Niger with a view to providing a joint action that will look into the possibility of ending this crisis,” he said.
“Furthermore, federal government has to look into the possibility of employing mercenaries with a view to ending this insurgency.
“For us to end this insurgency, we must be committed enough. We must bring in external support; ensure mercenaries are hired to end this insurgency.”
Zulum said attacks by Boko Haram insurgents have been on the rise in recent times.He urged the new service chiefs to develop fresh strategies in ending insurgency in the north-east.
“Violence been perpetrated by the insurgents seems to be on the increase both in scope and viciousness and it has become a matter of tactical necessity for the new service chiefs to devise new strategies to counter the current attacks and forestall any future attacks,” he said.
“Undoubtedly, the commitment of our military to the war against insurgency is unquestionable and the determination to succeed is undeniable.
“However the current escalation of deadly attacks by the terrorists and the various causes of actions being pursued seems to have some limitations in terms of the expected impact. Hence, the need for a new set of a pragmatic approach to completely subdue the terrorist and ultimately end the insurgency.”
This is not the first time Zulum will ask the federal government to seek external support in fighting insurgents.In November 2020, the governor had asked President Muhammadu Buhari to recruit mercenaries in getting rid of Boko Haram insurgents.
Ex-President Goodluck Jonathan had procured the services of mercenaries to assist the Nigerian army in the war against the insurgents.
But Buhari had described the use of mercenaries as “shameful”, and later terminated the contract with them.
The president had said such assistance represented the depth of weakness in the Nigerian army.