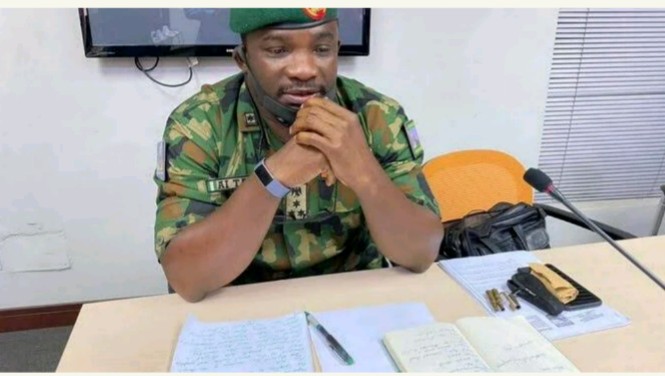 From Denial To Blame Game — Army And Lagos Governmet Spat On Lekki Shooting by dre11 ( m):
2:55p
“FAKE NEWS” – That was the Nigerian Army’s first response to reports that its personnel opened fire at the #EndSARS protest ground in Lekki, Lagos state.
The army shared a picture of a post claiming that soldiers were directed “to shoot at peaceful, unarmed #EndSARS protesters” at the tollgate, stamping it with “FAKE NEWS”, its usual signature to debunk whatever it considers unfavourable.
But with time, it became clear that the army might have a different definition of “fake news” from the common reference to misinformation and disinformation.
Between the time it shared the first post and Saturday, when it appeared before the Lagos panel of enquiry, the army has debunked 18 social media posts relating to the incident – but it has also gone ahead to admit most of them.
Likewise Babajide Sanwo-Olu, governor of Lagos, whose initial response was to blame the Lekki shooting on “forces beyond our direct control.”
Sanwo-Olu is yet to react to the claim of the army that he invited them to Lekki tollgate
Having followed developments around the Lekki shooting up till this moment, we bring you a timeline of inconsistencies between the Lagos government and the army:
October 20: Lagos declared a 24-hour curfew following the violence that broke out amid the #EndSARS protests. It later shifted the commencement of the curfew from 4pm to 9 pm.
October 20: The army denied reports that soldiers were at the Lekki tollgate. Through its official Twitter handle, it made the denial six times, asking people to “beware of fake news”.
October 20: Gbenga Omotoso, Lagos commissioner of information, said the governor has ordered a probe into “reports of shooting at the Lekki Toll Plaza”. Hours after, the governor promised to “get to the root” of the shooting which he blamed on “forces beyond our direct control.”
October 21: Sanwo-Olu said, contrary to reports of mass deaths, no one died as a result of the shooting.
October 22: The governor said he was not aware of the person who instructed the military to be at the tollgate, telling Arise TV: “Who gave instructions for military to be there? It is still something we are investigating. And we have escalated it to the highest level of military formation.”
He also told the television station that two dead bodies had been found linked to the incident in Lekki.
October 26: The governor said the army was responsible for the shooting. He had told CNN: “From the footage we could see, because there were some cameras at that facility, it seems to me that they would be men in military uniform—it should be Nigerian Army or something.”
October 27: The army admitted in a statement that its personnel were at the tollgate but claimed they were deployed only after being invited by the Lagos government. Osoba Olaniyi, a spokesperson of army’s 82 division in Lagos, however, insisted that soldiers “did not shoot at any civilian” during the protest.
October 29: Sani Usman, former spokesman of the Nigerian Army, said soldiers deployed in the Lekki tollgate fired blank bullets – not live bullets. According to him, “if you look at the canisters, they were blank ammo and blank ammo don’t even kill. At a close range, maybe 100-metres, it will have some pigmentation on your skin.”
November 14: At the hearing of the Lagos panel of enquiry, Ahmed Taiwo, a brigadier general of the Nigerian Army, said the army “was unhappy that he (Sanwo-Olu) said he did not ask the army to intervene” in the protest. He also said soldiers deployed to quell the protests wouldn’t have gone with catapults.”
Ibrahim Taiwo, commander of the 81 division, however, said the governor did the right thing by inviting soldiers to restore order during the #EndSARS protest in the state.

TIMELINE: From denial to blame game — the army/Lagos hanky-panky on Lekki shooting